Like companionable lovers returning from a night's worth of food and fun, the crescent moon and morning star make their way out of the eastern horizon this morning. Close, but not too close, bright without destination or intention, they seem to make their way home while being at home and at ease.

Because they do not need to laugh, they seem to smile. All things are such good fortune that calling their links and lights "good fortune" oversteps itself. From where I sit on the porch, it is beautiful, but that's my problem, not theirs.

Together with a potent cup of black coffee, the day fills up, moves home and is already home with something less blatant than a Mona Lisa smile. Before the lips can utter "amen," the amen has twinkled and shone in the eastern sky. It is comforting and "hot damn" without either comfort or surprise. 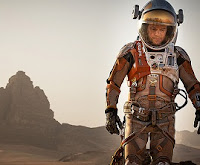 Yesterday, at the enthusiastic suggestion of a friend, I watched a movie called "The Martian," a film that opened to wildly positive reviews earlier this month. The geek-centric story tells the tale of an astronaut left behind on the red planet when a storm forces the rest of the team to depart. The movie centers on the attempt to retrieve the left-behind astronaut.

I can see why some might like it, but I had to push myself to watch it to the end: There was lots of scientific gimcrack to divert the attention from the fact that there was hardly a plot worth mentioning. Where were the people? "The Martian" was a bit of safe-sex imagination and I don't care for safe-sex imagination. The movie seemed to me to limp along on the premise that when things threatened to become boring, it was sufficient to throw in another technological problem and solution.

Oh well, Hollywood can live with safe-sex even as it pretends to expand the sexual boundaries. I'll continue to vote for authors like Ursula LeGuin who take the sci-fi bull by the horns: When it comes to imagination, she has balls.
Posted by genkaku at 6:09 AM