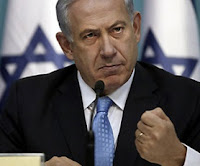 Syria's President Bashar Al-Assad has rained death and destruction down on so many of Syria's citizens that outsiders like me are left speechless.
Israel's Benjamin Netanyahu is, for the moment, a less obvious blood-letter. But he's doing his best.
Nevertheless, I wonder if it wouldn't be worth the price of admission to lock these two men in a single room and let them duke it out. Only when one is left standing would the door be unlocked and the victor led to the ceremonial woodchipper.
Proceeds from the videotaped bout could be applied to those dispossessed and left hungering by each of these men.
Posted by genkaku at 6:52 PM