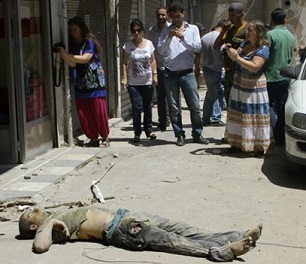 At first I thought it was just old age and crabbiness that made me skim with increasing inattention the internet offerings of the BBC. There was just something stale and sluggish that nudged at my news-hungry consciousness. Nevertheless, I kept on checking in daily because, well, this was the BBC, a name that had some cachet when it came to news.

But now, perhaps, there is another way to see things -- a way affecting all 'news' outlets, an expression of the public overload on too-much-information and too little time to absorb or care. Ace news reporters slip from high places, entertainment gains increasing purchase, and the binding glue that once brought people closer together has become dried and cracked and less-adherent. Another 25 people killed in a drone attack. Another child starves to death. Another bank scam called out years after it was put in place. People are getting fucked, but, well, getting fucked is no longer news ... or news that generates much revenue.

The BBC’s star presenters will be grounded at home instead of parachuted in to cover big stories around the world, it has emerged, as more cost-cutting measures from the corporation begin to bite....
The new guidelines handed down to editors state the changes are designed to help them manage numbers and costs “more effectively and more consistently”. They say: “The ability of the BBC to generate distinctive content is always a priority, but it needs to be balanced against the resulting total numbers.”

If the news "presenters," the pretty and recognizable ones, are going to stay home, how long is it before those presenters themselves are no longer necessary. Some of them are pretty bright along with being pretty pretty. But this is a Facebook era, after all, and Facebook is on the spot all the time, its credentials based largely, if not solely, in its throngs: If everyone says so, it must be so.

News dwindles. Connection -- often asserted and increasingly unproved -- dwindles. The BBC is not alone. Bit by bit, ignorance and belief gain sway. Joseph Goebbels readjusts an already-shimmering halo as men with cuff links rake in the results. Is it bad? Probably not, but I do think it is a footprint on the road to war. When was the last time you heard a rich man admit to being ashamed?

I apologize to my children and their friends.
Posted by genkaku at 11:45 AM