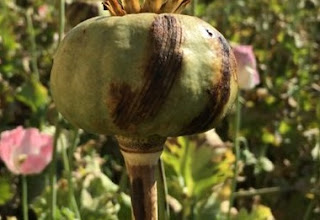 Opium production in Afghanistan has increased by 43% in the past year, United Nations officials have said....
Just 355 hectares (877 acres) of poppies were eradicated by provincial authorities in the last year - down more than a 90% since 2015, when almost 4,000 hectares were cleared.

Farmers need to feed their families; politicians need to pad their bank accounts; and all the anti-drug saber-rattling in the world can't eradicate that.

[The] failed drug intervention efforts constitute only a fraction of the enormous sums wasted by the U.S. since the start of the war in Afghanistan. In March of 2013, The Fiscal Times reported that the U.S. had spent nearly $100 billion to rebuild Afghanistan in the last decade, but   auditors could only account for 10 percent of that money.

And none of this mentions how many have starved or died or been otherwise dispossessed. And for this, the U.S. continues to prosecute a 15-year-old war the British and the Russians were lucky enough to have quit. Never mind the U.S. coffins.
Posted by genkaku at 9:41 AM