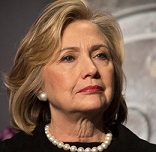 In an easy-going email to-and-fro with my sister last night, I suggested that Donald Trump's latest 'gaff' (I hesitate to use the word gaff when it comes to the 2016 Republican nominee for president since so much of his activity positively relies on a series of shape-shifting gaffs) benefited Hillary Clinton by its timing if nothing else: Trump's locker-room video 'stuns' a prurient American public at the same time that Wikileaks looses Clinton evidence of cozying up to bankers and stock brokers in a way former candidate Bernie Sanders and his constituency abominates ... and Clinton needs to pretend she is as liberal as Sanders if she wants to attract his voters.

The release of the [Trump] recording and ensuing backlash almost completely overshadowed the release of hacked emails from inside the Clinton campaign that revealed the contents of some of her previously secret paid speeches to Wall Street.
The Democratic nominee told bankers behind closed doors that she favored "open trade and open borders" and said Wall Street executives were best-positioned to help overhaul the U.S. financial sector. Such comments were distinctively at odds with her tough talk about trade and Wall Street during the primary campaign.

I pointed this out to my sister who countered that there was a lot of sub-rosa misogyny surrounding Clinton. That brought me up short. True, I think of Clinton as a good ol' boy wearing girl's clothes, but to attack her because she is a woman never occurred to me.

I have a very hard time remembering that there actually are people who dislike Barack Obama because he is black or Hillary Clinton because she is a woman. What sort of asshole approach is that? Well, it's probably more common than I would think. My objection to policies that disenfranchise so many or that send others to one or another of the U.S. wars that has no credible end-game scenario or that heap yet more student debt on college students while camouflaged behind a drum-beat credulity that a college education is really really a good thing (and only tangentially makes a packet of money for those with whom Congress is so cozy)....

All of these policies and more like them push my hair the wrong way. I don't care if the person promoting them is a woman or black or homosexual or Latino or any other put-upon segment of society. Self-serving, elitist policies are self-serving policies ... a woman jerk is no different from a man jerk.