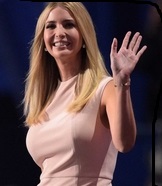 The arrogant, elitist rest of the world just plain wouldn't lie down for Donald Trump's daughter in Berlin. The seriousness of the issue (women's roles) was utterly laid aside as the first daughter flogged the first father. A truly embarrassing display of U.S. gravitas.

Try reading the credentials (in the article) of those with whom Ivanka shared the stage. I'm sorry, but "pretty but empty" seems the kindest description available.

Donald Trump's daughter Ivanka was met with groans as she defended her father's attitude towards women at the G20 women's summit in Berlin.
The First Daughter was taking part in a panel discussion about female entrepreneurs alongside German chancellor, Angela Merkel, and IMF chief Christine Lagarde.
But the audience bristled at her praise for the US president.
The event is part of the G20 women's summit.
An audible groan went up as she told the room her father was a "tremendous champion of supporting families and enabling them to thrive".