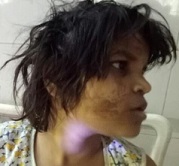 
[T]he rapid improvement she had made since being hospitalised now led doctors to believe she had in fact been raised by people. “Initially she was crawling but now she is walking normally – so she hasn’t been in the jungle since birth,” Lal said.
“The truth of the matter is her family didn’t want to look after her,” said Ranjana Kumari a leading activist in the movement to promote the welfare of young girls in a society where female foeticide persists, and has severely distorted birth rates, especially in rural areas.