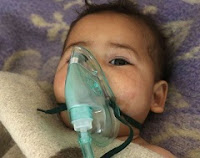 A suspected chemical gas attack in Syria has left an estimated 58 people dead -- 11 of them children.

The U.S. has been quick to criticize such attacks (laid at Syria's door step) in the past. Bombs are bad, but gas is somehow even more inhumane and ungentlemanly.

Of late, the American government which claimed it would displace Syrian President Bashar al-Assad -- who was described in the most demeaning terms as a dictator -- has found itself slowly but surely aligning itself with the dictator it once planned to dislodge.


The Washington Post has reported that the White House was considering a shift in policy toward the nearly two-year-long conflict in Syria and may send the rebels body armor and armed vehicles, and possibly provide military training. According to the report, U.S. officials still oppose providing arms.