What follows probably qualifies in the same basket as the old logic joke:

All tables have four legs.
My dog has four legs.
Ergo, my dog is a table.

Though wrong-headed, what follows has stuck with me and made me smirk ... or something like that. So I'll write it down and hope no one gets too serious ... me included.

Among the silver tongued and slick, you can sometimes hear the Chinese fortune cookie that goes, "The definition of insanity is doing the same thing over and over again, but expecting different results." Examination (look it up yourself or open your eyes) shows this to be false, but it is so tasty on the tongue that it is hard to escape. I don't agree with it, but it came into my mind as a premise for a bit of thinking last night.

Premise: OK, the nutters do the same thing over and over in hopes of achieving some different and implicitly more acceptable result. 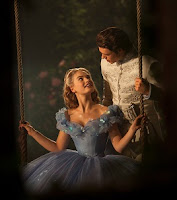 Last night I was flipping around the TV channels and ran into the reboot of "Cinderella." It's a movie version of the old fairy tale and I have to admit its bedrock gets to me -- the wicked stepmother treats the sweet, lovable girl badly but she gets her prince in the end. Up from under life's slings and arrows ... a happy ending ... bluebirds sing, as well they might. The older I get the more I like happy endings ... I don't give a damn if they're lies.

And while watching the movie, it occurred to me that no matter how often I watched it, the outcome would still be the same. A happy ending ... over and over and over again. I don't watch the movie expecting to run into a gloomy ending. No, I expect the same thing over and over and over. This is the mirror image of the slick definition of "insanity" above. And if that is true, does expecting the same outcome make me sane or insane?

Oh well, I'm perilously close to a brain seizure somehow. I guess I'll just be sane or insane and let someone else sort it out...