the "Mother of All Bombs" 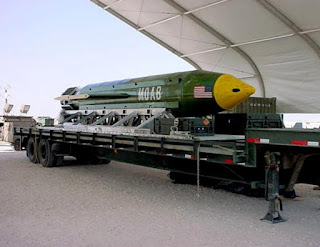 The United States dropped "the mother of all bombs," the largest non-nuclear device it has ever unleashed in combat, on a network of caves and tunnels used by Islamic State in eastern Afghanistan on Thursday, the military said.
President Donald Trump touted the bombing as evidence of a more muscular U.S. foreign policy since he took office in January after eight years of President Barack Obama.


As the Nazis burnished their wartime sabres in the Spanish Civil War prior to World War II, so the United States et al appear to be gearing up for a new and improved weapons festival that will include the likes of the "mother of all bombs" dropped yesterday in Afghanistan -- the one almost (almost but not quite (?)) as big as the WWI tunnel explosion In Messen/Messines (Belgium/France) whose blast was said to be felt 120 miles away at 10 Downing St. in London. (The list of enormous explosions is pretty informative in Wikipedia ... just the number of those who felt abject fear, let along got killed.)

Boys with toys.
An all-white cabinet.
Shit oh dear!
Why don't we all get drunk, form a circle, and chant the word "penis" as if we were six again?

It makes me wonder if anyone attending an Ivy League College should be forced to take a two-year-course in civics ... against the time when they too will find their fingers on the trigger of the mother of all bombs. Or perhaps a couple of semesters investigating the fruitfulness of shame. Is there any shame at Harvard, Yale, Princeton, Smith, Columbia, Mount Holyoke ....