During WWII, when we were kindergarten-sized, Abigail and I were thrown together because our mothers shared a large apartment in New York City. Abby got back in touch more recently and now we converse from time to time. I spent most of my writing bolt reponding to her this morning ... not much meaning to anyone but me.

To: Adam Fisher
Abby --
What an utterly delightful note to wake up to. Thanks. I am not left-handed but am content beyond measure to think I could be the blamed-for-everything agent in someone's life. Sky fallin'? Adam screwed the pooch again!!!! Coffee on the newspaper? Probably Adam's Puckish streak. Shoe laces in square knots? I told you Adam was bad luck!!!

Finally I get settled on the porch to discover that the lead story in the section I'd brought out with me was all about THE CORRECT WAY TO TIE ONE’S SHOES.

If you had populated the Brown Rice Circuit as much as I have over the years, you would know that the above adventure/occurrence/serendipity, had a D-E-E-E-E-P  M-E-A-N-I-N-G. God, I can almost see the glassy-eyed acolytes smiling slightly but knowingly while simultaneously reaching for the wallets that of course are required to any serendipitous/spiritual smog.

Ran across this the other day in an interview with British actor Bill Nighy:
"At some point, you just start to think: ‘I can’t live like this any more, this is ridiculous. When do I get to the bit where I realise apparently I’m OK?’ There comes a point where you get too long in the tooth to swallow your own bullshit. That’s my deep philosophical remark for the day.”

Yesterday, in the never-ending quest to break the Guinness Book of World Records for visiting doctors, I felt my sawdust depleted by yet another one ... a relatively sane fellow who is not afraid to address death with something other than a TED talk. Two things were of interest: 1. His vague-guess, you-will-die-when prognostication (nothing firm, of course) came into alignment with the Pakistani who read my fortune so many years ago and said I would die between 83 and 85, a suggestion that actuarial tables tend to applaud as far as guess-work goes. Tim, the doctor, told me he was doing what he could to keep me comfortable given the circumstances... which he then proceeded (2.) to laundry list: I had not heard everything put cheek by jowl ... it was quite a Christmas list and it jiggled my pistons. COPD, congestive heart failure, atrial fibrillation, emphysema, peripheral artery disease, a bacterial toe infection after having tried to clip a toe nail ... and others that don't seem to fit on this morning's blackboard. I cannot keep up with the schedules required for all the meds ... literally, I cannot keep up. Although it may not sound like it, all this is not a whine ... rather it is just the tiptoeing of time that has managed to sneak up and, apparently, POUNCE. I try to keep every activity one-pointed. The infected toe and the anti-biotics required ... that's enough for me ... much as shoe laces may be enough for you.

Tim, the doctor, suggests I have six or eight more years. The fortune teller did much the same. Sometimes I wonder if it wouldn't be easier to believe the magical mystery tour from the get-go and quit finding "scientific fact" coming to the same conclusions, give or take a bit. Alternatively, why not just believe scientific fact and be done with it .... fuck the magical mystery tour. If they're both going to agree sooner or later (parallel lines meet in eternity and Donald Trump is president), why not just cut to the chase? Fake news? True news? See below.

I have lost my thread here, so I guess I'll stop.

Passed on  in email: 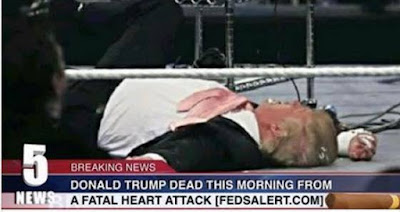