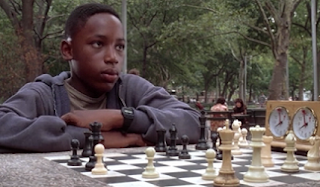 Yesterday, as is often the case, by accident, I ran across perhaps the last third of a 1994 movie called "Fresh." And it was indeed fresh. At first, I thought I would turn it off in about five minutes ... it was drugs and dealing and cruelty and had all the earmarks of another ain't-it-awful, gritty, the-director-is-so-insightful clone.

Not so. Yes, it's underbelly fare. But the people affected are just that -- people. If the movie had a failing in my eyes, it was ascribing to the 12-13-year-old protagonist the capacity for silence and adult maneuvering. Occasionally, the maneuvers were a little too savvy to be credible ... on the other hand, in a cruel world, kids grow up fast and hard.

I haven't yet found the site where I can watch the rest of the movie for free, but I will take the time later today. Others with greater skills or assets may want to give it a try in the meantime.
Posted by genkaku at 9:13 AM