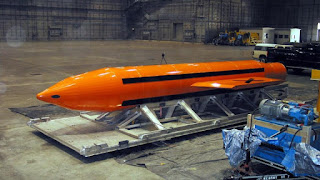 The "mother of all bombs" (actually, Massive Ordnance Air Blast) dropped on a faraway (few or no civilians to constitute "collateral damage") bit of Afghan territory cost "$314 million to develop and has a unit cost of $16 million."

The explosion apparently scared those in the neighborhood shitless. 36 alleged ISIS combatants were said to have been killed. The cost/kill ratio, if I've got it right, is close to $4.4 million per fighter. But of course there's untold ordnance hidden from view and the scare impact. I wonder if ISIS has ever felt so valued ("valued" in the Donald-Trump sense).

This big bang seems to dovetail nicely with Donald Trump's explicit promise to reinvigorate the military budget and his implicit promise not to come up with a policy that would nourish and build the nation it is easier to dismantle.

Perhaps it's irrelevant, but perhaps not:


More than 2,000 migrants trying to reach Europe were plucked from the Mediterranean on Friday in a series of dramatic rescues and one person was found dead, officials and witnesses said. An Italian coast guard spokesman said 19 rescue operations by the coast guard or ships operated by non-governmental organizations had saved a total of 2,074 migrants on 16 rubber dinghies and three small wooden boats.