diary of a tortured man 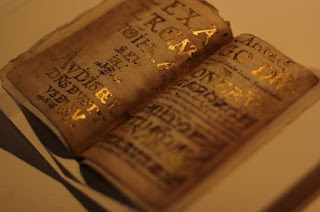 A story of torture, betrayal and persecution is captivating Mexicans almost 500 years after it happened.
The dramatic life and death of the Carvajal family in 16th-Century Mexico is in the spotlight after a decades-long search for a national treasure came to an unexpected happy ending.

A bizarro story on several fronts.

Grisly, Inquisition-toned stuff, with the power-hungry Christians after the allegedly apostate Jews. The CIA appears to have nothing on the inquisitors ... I mean, really ... imagine having your wife and family tortured in the next cell so that you could clearly hear the screams and hence give up the names of your beloved (Jewish) comrades.

Of course those who have been tortured seem to have little stomach for not torturing in their turn. You might think that such a grisly narrative would put righteousness in the spotlight ... but ... well ... Jews, Gentiles, Arabs, Tutsi, Hutu ... pick a group and the long lineage of screams continues.
Posted by genkaku at 10:48 AM