getting the words 'right' 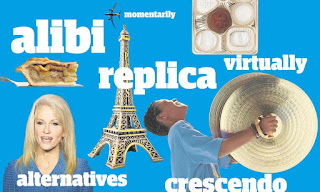 In the long ago and faraway, I used to be a newspaper reporter and as such was assigned more than once to do a story on the home-grown (Springfield, Mass.) story of Merriam Webster, which was the only U.S. dictionary to do its own research and, like other dictionaries, would come out with a new edition with newly-appended words every year or so.

It was a light, press-release-y story, but it was fun and, when I was assigned to do the story of the new edition, I would invariably call up the boss man whose name I have forgotten. We both knew the game of writing the story -- lead with the new words, plug the dictionary, etc. -- so the two of us would zip through that and then....

Because both of us were what I thought of as Republican lovers of language -- words have meaning and for clarity it is best to stick to that meaning -- we were grumpy about the lackadaisical new meanings that morphed to the surface. Eg. "Alienation" once had a sociological preciseness which, if not precisely precise, was at least more precise than the hang-dog teenager whining about whatever hang-dog teenagers bemoaned and suffered from.

The two of us sat on the phone and tried to think of a way to return language to its meaning and clarity. It never worked. The accretions that language took on was quite like the variations of a folk song ... new arabesques of musical phrasing, new words or changed words, new variations of hang-dog teenagers or exultant, I-can-do-it-better adults.

Anyway, I retain some of that verbal conservatism of yore and continue to be pleased when I find fellow travelers ... never mind how fruitless the task at hand. And so I thank The Guardian for...

The 35 words you’re (probably) getting wrong
Have you made a flagrant error, in confusing your alternative choices? The legendary Fleet Street editor Harold Evans proscribes this glossary to solve your language dilemmas