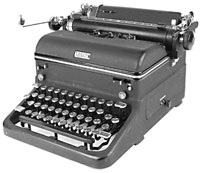 ALBUQUERQUE, N.M. (AP) -- Typewriter enthusiasts gather at an Albuquerque restaurant to experiment with vintage Smith Coronas. Fans in Boston kneel in a city square and type stories about their lives during a pro-immigration demonstration. A documentary on typewriters featuring Tom Hanks and musician John Mayer is set for release this summer.

In the age of smartphones, social media and hacking fears, vintage typewriters that once gathered dust in attics and basements are attracting a new generation of fans across the U.S.

I swear someone probably put this story on the news wires so that old farts like me could find some excuse for allowing the typewriter in the basement to continue to gather dust. I've got one -- a good one -- and haven't a clue what to do with it until I move to a high-rise building and find a tempting target twenty stories below.

I took my first typing class in the fourth grade and it proved its usefulness right into and beyond news reporting at 30-something. It was a way to be neat, but I mostly had a bias against it when it came to serious writing -- or writing I took seriously. Handwriting was for serious stuff, creative stuff, explosive stuff. Typing was a way to keep things are arms length; handwriting was what made you bleed.

How many times did I practice, "the quick brown fox jumps over the lazy dog and bumps his nose?"

There were people on TV because they could type 100 words per minute.

And the old sports columnist Red Smith had it right: When asked if writing were difficult, he said, "Why, no, you simply sit down at the typewriter, open your veins, and bleed."

Somewhere after the typewriter, I suspect the blood ran out.

PS. Somehow the serendipity of this article dovetailed with a dowdy, frumpy page 1 story in the local paper about a naked man seen for the fifth time (though maybe it was a different guy) in downtown Northampton.

A flasher. Page 1. Nakedness is news.

Still, I like the titillation -- a flasher on page 1. Nicely old-fashioned. What can you show off any longer that actuallyt qualifies as a- or anti-social?

Garrison Keillor, one-time purveyor of radio's "Prairie Home Companion," once observed that men go to art museums to see naked women. Even if it is untrue, I'm not going to be the one to correct him.

It's fusty, but its yum into the bargain.
Posted by genkaku at 3:58 PM