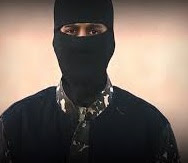 It may be too much of a stretch, but it strikes me that the Islamic State that is blamed for and invites calumny for its violent acts around the world is not so very different from the Islamic State of American president Donald Trump's mind.

A snap of the fingers and men and women dressed in black, wearing masks and carrying automatic rifles forms up and swarms down on an increasingly diminishing peaceable kingdom that is the rest of us. True, Islamic State makes occasional, twisted reference, to the Quran where Trump finds his authority within his own fevered and sociopathic mind, but the militaristic results -- the bombed buildings and the hungry and parentless children (collateral damage in the great good, dontcha know) ... it feels about right.

Everyone's wrong except us -- who said that: Islamic State or Donald Trump?

Black anonymity is the new black.

Donald Trump has not kept a single legislative promise in his first half year of rule. Islamic State, like Trump, keeps up the campaign rhetoric even when the chance to sow something fruitful crops up.

The argument feels too flimsy, but it seems to feel like something in my mind.

Couldn't we just give them Madagascar or Wyoming, put a wall around it and let it go at that?
Posted by genkaku at 11:43 AM