Noah's ark and the tourists 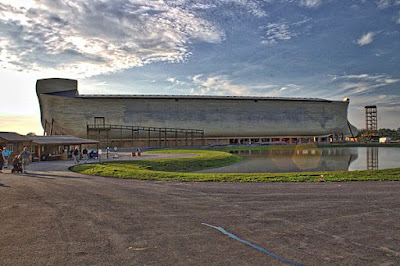 It's a little hard to get a handle on the subject, but it seems that the replica of Christianity's Noah's Ark is not drawing in the throngs that caused Kentucky and its officials to pony up what some are describing as a $100 million support structure. Where Kentucky got $100 million to fool around with beats me, but apparently Ken Ham, the creationist whose vision inspired the building sells a fine brand of creationism. Ham lays blame for the faltering financials at the doorstep of atheists who prayed (you heard right) against the project. The theme park opened, if I get it right, in July of 2016.


Built with the same measurements God gave Noah in Genesis 6:15, the ... ark is the largest timber-frame structure in the world. It's just over 500 feet long - one and a half times the length of a football field - about 50 feet tall, and 85 feet wide.


The organization behind a tax-payer subsidized “replica” of Noah’s Ark in Kentucky is blaming atheists for tax-payers getting fleeced by the project. Creationist Ken Ham built the $92 million Ark Encounter project in Williamstown, Kentucky. The “dismal failure” of the project has backers lashing out at “intolerant atheists” for mocking the return on investment taxpayers have received. “Sadly, they are influencing business investors and others in such a negative way that they may prevent Grant County, Kentucky, from achieving the economic recovery that its officials and residents have been seeking,” complained Ken Ham, president of Answers in Genesis.

I wonder if putting a "Trump" label on the project would turn its fortunes around.

Whatever the case, I think the topic positively insists on the use of the word, "bizarre." Also to recall the words of the Anglican Charles Williams who once wrote, "people believe what they want to believe."

Lord, the need to believe in something grand and sweeping -- and I don't mean solely among the less-thoughtful -- is compelling. The Kentucky ark lies somewhere between touching and terrifying, between lulling and ludicrous. Snippy atheists don't impress me much more than Ken Ham. There is something human, and therefore partly insane, about it all.

The Japanese have a tradition of honoring great failures -- a tradition I think deserves a second look.
Posted by genkaku at 4:46 PM