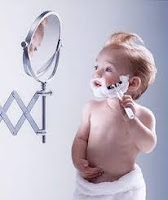 With Donald Trump backing artfully away from the imminent failure of the Senate to "repeal and replace" former President Barak Obama's Affordable Care Act -- one of Trump's signature campaign promises to which he is about to claim no affiliation ... it's the Senate's fault dontchaknow -- I found myself yesterday watching my own scale of importance get revised....

Last week, Steve came around to replace the storm door leading to the kitchen. The door, like a lot of American products, is flimsy and poorly engineered, so Steve had to come back to adjust it. There was one more tweak needed, so I called Steve last night to remind him. I was irritated by the need to repair what was to all intents a brand new door. The idea that the consumer should have to worry about the capitalist cheapskates was galling: How is the consumer -- caveat emptor -- to know about storm doors? Isn't the purveyor responsible for the quality of the product s/he wishes to sell as a means of putting spaghetti on his/her table?

Steve's business card says "Service you can trust." I prefer to trust... right up to the moment that the product proves untrustworthy. Yes, I was feeling cranky.

But when I reached Steve and asked him not to forget about me as he geared up for a vacation down south, he told me it had been a hell of a day. He wouldn't forget me, but he had just put his mother in a nursing home in the wake of a stroke several months ago. "She isn't going to like it," he said wearily.

And somehow Steve's announcement wiped my slate clean of the crankies. How could my complaints measure up against his confusion and sorrow? Playing Donald Trump, I guess I could have thought "Fuck him -- he didn't do the job he promised implicitly to do. It's my money he has taken." I wasn't forgiving his debt to me, but I was getting a perspective that put my money and my cares in the shadows.

In Steve's boat ... besides putting a loved one in someone else's care, there is the matter of your own mortality and, perhaps harder, the realization that you are now the only one left to play the grown-up. When all the grown-ups dissolve and you are the de facto grown-up ... well, how does anyone do that? Is it by yelling and bullying? Who will believe that I am a grown-up? I certainly don't.

I can hear the grown-ups saying all kinds of grown-up things about apples and oranges and Steve owed me a decent door. I can play that game, but ... well, it just didn't have the self-important force it might have during a TED talk.

To me, it felt better to feel less cranky and the care about something worth caring about. Not that I don't want the door fixed, but if the door were the price for relieving the stress of death or uncertainty, I'd live with a flimsy door in a New York minute.

So much for my uncalibrated scales.