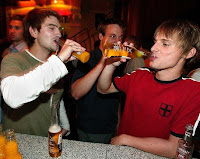 I wonder if it's true that women live longer than men because women sacrifice for life while men sacrifice for ego (the stuff that puts food on the table) ... and life is more interesting than ego.


Although the gap in life expectancy had started to narrow in the 1970s, the overall death rate is again climbing, particularly for white American men, making it essential to understand why the state of men’s health is going from bad to worse.

Buddhists, among others, frequently give ego a bad rap and it certainly deserves investigation, but to suggest that ego is without its uses is a step too far. It takes a toll, telling so many half-truths, bolstering and waxing boisterous and locking horns.

I don't know. I just wonder and figure my half-baked speculation is as possible as some BBC quasi-scientific speculation. Probably not, but it might make for a beer-drinking topic.
Posted by genkaku at 9:41 AM