a real challenge to world's hackers 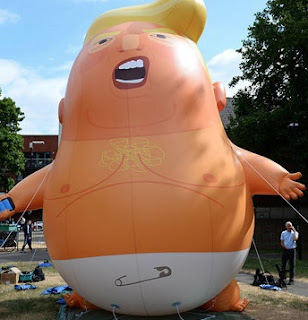 With the 26th Def-Con hacking conference scheduled for Aug. 9-12 in Las Vegas, now may be the time to offer one last encouragement to the world's computer wizards to give back to a universe that has been so good to them.

Hackers around the globe have proved adept at cracking financial or industrial or governmental fortresses, but without the world wide web to challenge their various bits of expertise, where would they be?

Isn't it time to say a collective thank you?

And what better way to both exhibit expertise and bow to the world that made it all possible than to hack into the various facets of the internet and for one 24-hour period -- just one day -- block and banish all news stories about or relating to Donald J. Trump? Nothing, nada, zip, zero....

A childish dream with potentially serious blowback, you say, but I say the good effects outweigh the bad.

What a relief, for starters.

Then there is the matter of Trump's capacity to slap/lie/misrepresent in gross terms a single topic and then turn around and kiss it better. How much difference could a 24 hour hiatus make?

And then too, news outlets might find rafts of news that go uncovered or under-reported or poorly-researched due to the feeding frenzy coverage granted to Trump's latest, self-centered pirouette.

Just one, single day of no stories that refer to or are penned by Donald J. Trump.

These are the best of the best, these hackers. If anyone can make this dream come true, hackers can and should. A wider world will thank them.

I am lazy enough to be unwilling to check the news wires I read each day to determine how much space such an action might free up. A third, at least, is my lazy-man's guess. News ... imagine that!

Perhaps the August conference is a good time to start mapping a strategy. Just bar Trump from living rooms and dens and sofa nooks across the world. One day. A breather.

Would Trump implode? I don't know, but I do know it would help him to learn that though he may long to be the cynosure of all eyes, still there is a higher authority ... and he ain't it. Would such an algorithmic bit of magic open the door to even greater crimes? Difficult to know ... but worth finding out.

Someplace out there, I started an inept (friends told me so) petition asking hackers to pick a day among themselves -- perhaps in August -- and make it all happen. I can't find it any longer, but it was pretty inept in any case, so nothing is really lost. But the Def-Con conference might be just the place to start hatching a plan that might create a reality. There is no time like the present.