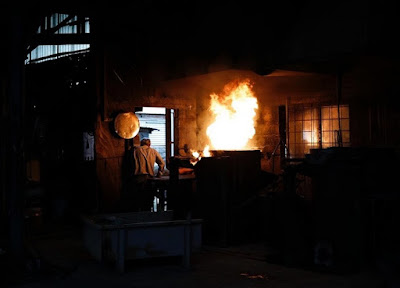 
...[T]he buzz of the foundry rarely stops. The craft, a painstaking process of mostly manual labour, has remained largely unchanged since the 12th century.

Being something of a bell-freak, I remember seeing a Japanese movie about making gongs. It was extremely labor-intensive and yet people kept doing it ... despite the mysterious fact that you never could tell if you were going to produce a satisfactory sound. Sound, in a Japanese temple, is really important.
Posted by genkaku at 10:29 AM