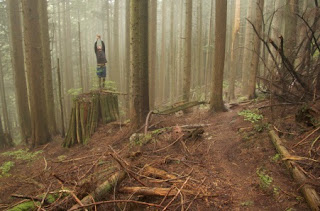 I don't recall many male role models when I was growing up. My mother and father were divorced, I came under my mother's wing. But both parents were intellectually inclined if not equally capable. If there is no immediate father figure, where is a boy to look. Where is his action figure, can-do, derring-do male footprint? John Wayne during Saturday afternoon matinees only reached so far ... who was there, then, to tell me the stuff a boy wants to know without, as often as not, even knowing it? I wanted to be right, to be unsullied, to be unafraid, to be a grown-up ... but ... but the "buts" seemed all around me. I shudder to think of how I may have failed my own sons.

I suppose the templates were all around me as well, but two of the most direct bubbled up this morning for reasons I cannot guess. The direct. The heart-stopping. The object lesson from a credible, if distant male.

1. I was skiing on a no-account public hill one day when I was in, perhaps the sixth or seventh grade. There was no tow, so each run down was mirrored by a walk back up. There wasn't much excitement to it. But on one such return to the wussy pinnacle, as I concentrated on my upward course, a man nearby pitched his voice in such a way that I knew it was meant for me. "Any asshole," he began firmly, "can ski fast. It takes a good skiier to ski slow." I looked at him and I imagine he looked back. He was not insistent, but he was assured as cold milk in the refrigerator. He barely thought of his challenge as a challenge, his face said. This was just the truth. Take it or leave it.

2. Some years later, at 19, Pete and I were picked up at the train station in Oregon by the foreman at the lumbering camp both of us would work at for the summer of 1959. Arne Jarve, a big, silent Finn who fit snugly behind the pick-up truck's steering wheel. He was big. The steering wheel looked small in his hands. He looked tough as nails to me and I was prepared, if he ordered it, to jump to whatever assignment he gave. Challenging a guy like Arne Jarve would have been like challenging a steamroller.

But the situation was strange. Pete's father, the president of one of the west coast's largest lumbering companies, had gotten me the summer job at Pete's request. Pete, a fish-out-of-water junior at the college where I was a freshman was rumored, even at his young age, to be worth a million dollars. But he also longed to be part of a rag-tag, imagined-bohemian group I fit into ... writing, painting, music and sex. Pete wanted to be accepted and as a freshman I looked like a key to the door he wanted to pass through. I didn't pay much attention to him until he said his father could get me a summer job ... outdoors ... in a lumbering camp. Since we were both a little tipsy when he said this, I didn't pay much attention, though my summer-job longings lurched a little: What a dream-come-true that would be! But Pete remembered and, in fact arranged it and so the two of us were sitting with Arne Jarve in the pick-up: Pete's father thought a summer in the woods might do his son good. I thought Pete was a square peg headed for a round hole, but if it got me a job, I wasn't going to complain. I can't imagine what Arne must have been thinking as he ferried the boss's son and his East-coast stringbean of a too-clean sidekick in towards town.

Jarve kept his thoughts to himself except to inform us that on the job running property lines through the woods, we were required to wear spiked boots (which we had to buy) and a construction-site helmet, which the company would provide. Turning to my left a little to address Jarve more directly in the pick-up, I asked, "Do we need to wear gloves?" There was the barest fraction of a silence before he replied, even-toned, "I don't wear them." That nano-silence tore my paper ... the cocksucker was challenging this East Coast pussy to get it on ... and I vowed then and there that I wouldn't wear gloves no matter what the cost. By the end of that summer, my hands were hard as nails, calloused and scarred and ... I had been right as rain.

The first day of work on our five-man crew was the roughest terrain I ever faced, Army included. I climbed and clambered on all fours, it was so steep. And I suppose I won my spurs when, one day, our crew ran into another crew that was removing gigantic stumps and we all stopped for a cigarette break.

I was sitting on a huge stump, listening to the conversation that skittered here and there when, all of a sudden, from my rear, came a tremendous explosion. One of the stump-removers thought it might be funny to see the greenhorn jump when he put a single stick of dynamite under the stump on which that greenhorn was sitting. What the hell, it was just for fun. It was only a single stick of dynamite. The greenhorn did in fact jump and then, seeing the laughter all around him, laughed as well. If he could take that, he must be at least a little bit OK ... not entirely an East-Coast sissy.

Pete never did get it -- the ragging that all summer employees get on the job, the bullshit they eat before they refuse to eat any more and are more or less welcomed. Pete wasn't accustomed to what his father wanted to accustom him to. I felt, by summer's end, a bit sorry for him, but declined the offer of a cruise up the Pacific coast in his father's yacht. In many ways, Pete was a walking definition of "poor little rich boy." I felt sorry, but I didn't like Pete much.