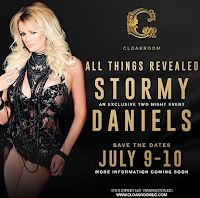 A strange concatenation and perhaps one indicative of the times Donald Trump has landed my country in. I have always taken the Supreme Court seriously. With luck (and discounting the Citizens United case), the Supreme Court represents a potential even keel in choppy, immoral seas Trump has confected and stoked. Serious people on serious business, and yet this morning some part of me pinned its hopes not so much on the court as on a naked lady who alleges she was paid off in the wake of a little sex with the now-president.

God, how Americans hate their love of prurience! Or, how they love their hatred of carnal manipulations and pleasures. It's a Trump moment -- everything reduced to a level that Trump himself adores ... women as sex objects, manly men, bigotry, ignorance, racism, tax breaks for his handlers, imbalancing what others tried so hard to balance ... and yet when Stormy speaks (as she did in March on "Sixty Minutes") her voice and allegations are level-headed and, from where I sit, credible. She comes across, as my father used to say, "as a person with sand." Is she out for herself. Probably. Is her lawyer out for his own best interests? Probably. But are the two of them nonetheless more credible that the president of the United States? I think so.

Or is all of this just teen-swoon poetic justice or, as I said, the refrain of Sally Five-Fingers?


WASHINGTON (AP) — As President Donald Trump exercised his power by nominating Brett Kavanaugh Monday night at the White House, adult film star Stormy Daniels exercised hers about a mile away, wearing nothing but black heels....
Daniels, whose real name is Stephanie Clifford, has said she had sex with Trump in 2006 when he was married, which Trump has denied. She’s suing Trump and his former longtime personal lawyer and fixer Michael Cohen and seeking to invalidate a nondisclosure agreement that she signed days before the 2016 presidential election.
It was unclear how much money the club and Daniels were earning from the event, which charged $50 and up per seat. The venue, DeMoya said, can seat a couple hundred people, but it was not nearly full....

Trump supporters may willingly overlook the fact that promised coal-mining jobs have not been implemented. They may dismiss as the fault of Democrats the fact that Republicans have yet to come up with a promised replacement for Barack Obama's health care initiative. They may go with Trump's flow on "fake news" even as he embellishes the realm. They may point fingers elsewhere when asked to think through the assaults on diplomacy and international relations. But sex and fucking? This is a world that they understand.

As General George Patton once said, "A man who won't fuck, won't fight" and Trump is nothing if not a ... uh ... fucker ... or is that "fighter?" Or at least that's the way he casts the story and that's the story his supporters can hear ... even if he has to try to buy his way out of it.

So maybe Stormy's come-hither body -- and don't-fuck-with-me mind -- is just the ticket.