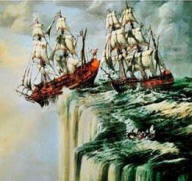 Stepping off the edge of my flat earth....

I was 21 when I found that I had signed my name, taken my vows and ended up -- as was then mandatory in the U.S. -- in the American army. Aside from anything else, I was scared: I didn't know anything about where I was or where I was going but I did know that someone else -- a very big someone else -- was in charge of my universe.

It wasn't all smooth sailing in order for me to sign up. To heap weird on top of weird, I needed five character reference letters in order to link up successfully with the Army Security Agency I was linking up with ... an agency that boasted 80% of its recruits went to Europe, which is where I wanted to go.

One of those letters of reference came from a minister who had once been a high school English teacher of mine. He wrote a nice enough reference letter, but appended a private note that suggested I shouldn't go into the army at all: I was too rebellious, too loud-mouthed, too individualistic ... and the army did not look kindly on such attributes. They'd eat me for breakfast, he suggested.

But now, here I was, having stepped off the edge of my school-bubble flat earth and into the great unknown. Really, I didn't know anything and it scared me. And then the the minister's admonition echoed in my mind ... they'll eat you for breakfast, you'll never fit in. it's just not you.

But basic training made itself clear pretty quickly. A step into the deeply unknown was ... wait for it ... a cake walk. All I had to do was be right according to some fairly simple rules: make your bed, straighten your foot locker, clean your rifle, polish your boots ... this and more like it was all the army really required. It was easy to be right and the army loved "right." Nobody gave shit what I thought. No one gave a shit what my philosophy was. No one cared if I had read Marx and Engels.

Just be right. And being right was easy. The vast unknown -- vast enough to inspire a virulent case of metaphorical diarrhea -- was off the edge of my small, flat world. I was lost-lost-lost and ... it was a piece of cake.

The minister had miscalculated ... as had I. Just following rules is perhaps the easiest way to live this life. And not only that, it's social and full of friends with similar aspirations, fears and successes. And all you had to do was be right in order to get a gold star.

Be right? Sure. Lots of agreement and back-slapping and propaganda and no need to parse and dissect and see for yourself. Follow the rules and you'll always have company. The army helped me realize how others lived and how/why I felt lonely.

For the better part of three years, I lived in the military womb.

In the end, I decided not to re-enlist because, as I told a friend, "I don't want to work at any job from which I cannot (without real effort) be fired."

So I stepped off the military's flat earth and into a realm of vast, vast uncertainty. I'm still trying to fold my socks according to the, uh, 'rules.'