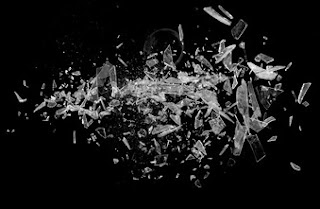 Suddenly, like some exploding California wildfire currently raging in the West, things are a mess. What was relatively calm has turned into a shit storm of glass shards whizzing around my house.

1. My younger son started a guard job yesterday at a nearby welfare office. He viewed the job as a stepping stone to the cop he would like to be. Today he received an email saying he had no job: There had been a disconnect between the state offices near Boston that had hired him and the local welfare office which had no hours to give him. Having a job has been a hard row for him to hoe, so getting the job was a relief and losing it was ... a cutting shard.

2. My younger son and his partner, who is also living at our house, are having a falling out whose echoes I do what I can not to stick my nose into but cannot help but feel the fallout from. What's happening I don't know, but it's cutting.

3. A friend of mine in Maine wrote (and we talked this morning about) to say he was being forced to put down today his companion dog of nine years ... his best friend. Harley-Bear is old, his back legs are going, he has become incontinent ... the whole nine, cutting yards. There is precisely nothing I can do about it but absorb the long-distant, sympathetic cut.

4. My older son is due for an 8-10-day visit later today ... another cutting wrinkle in the cloth somehow.

Heretofore, things around the house have been relatively OK. Bumps, yes, but nothing major. Now there is dust dust and more dust in the air. I don't like it, having my relative calm shaken by forces I can do nothing about. Helplessness is not the men-are-from-fixit-Mars mindset I have to plead guilty to. A little peace and quiet seems little to ask and yet, in the midst of all these bits and sharp pieces, it is far too much and far too self-centered. And still a little peace and quiet is what I hope/whine for. An woe betide the well-wisher dispensing regurgitated Buddhist wisdom!

I can't sort it out. I can't fix it. And the whole business leaves me somewhere between growling angrily and wiping up confused tears. This universe gives me the kind of whimwhams that entering a cinderblock house filled with tear gas and removing my gas mask before stating my name, rank and serial number did in the army.
Posted by genkaku at 9:03 AM