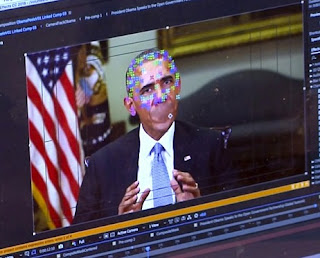 Just in time for U.S. President Donald Trump and his political mirror images to utilize in the 2018 mid-term elections:


New technology on the internet lets anyone make videos of real people appearing to say things they’ve never said. Republicans and Democrats predict this high-tech way of putting words in someone’s mouth will become the latest weapon in disinformation wars against the United States and other Western democracies.
We’re not talking about lip-syncing videos. This technology uses facial mapping and artificial intelligence to produce videos that appear so genuine it’s hard to spot the phonies. Lawmakers and intelligence officials worry that the bogus videos — called deepfakes — could be used to threaten national security or interfere in elections.
So far, that hasn’t happened, but experts say it’s not a question of if, but when.

"Deepfakes" -- if everyone is lying to everyone else all the time ... uhhh ... does that make Trump's "fake news" fake or does it make it true? You might think this is a joke for some novice philosophy student or a mathematician in training (a minus times a minus is a plus ... have I remembered that right?), but lies are insidious and far from smirk-worthy in the end. My social links wither together with "the truth" and I don't like being lonely. On the other hand, maybe this story itself is nothing but a "deepfake," a plot by 'big pharma' aimed at pushing me down the pill-puddled path to the future.

The lazy savants may view the advent of this technological deepfake wunderkind as a blessing: "Toldja so! Now the electorate will have to think for itself." But no one really wants that responsibility. Everyone would like to trust someone: After all, there are groceries to be bought and soccer games to attend and eeking out enough money to keep pace with the oh-so-improved economy that never seems to reach my house.... I need to trust someone, as Donald Trump advocates can demonstrate in spades.

"Speak truth to power?" What truth? What power? Who will arbitrate this clusterfuck? Are the oligarchs dancing on our graves? I imagine they might be. Fake-faker-fakest ... when draining the bureaucratic swamp is nothing short of filling it.
Posted by genkaku at 9:59 AM