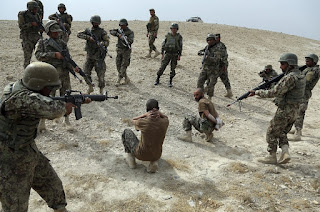 KABUL, Afghanistan (AP) — When U.S. forces and their Afghan allies rode into Kabul in November 2001 they were greeted as liberators. But after 17 years of war, the Taliban have retaken half the country, security is worse than it’s ever been, and many Afghans place the blame squarely on the Americans.
The United States has lost more than 2,400 soldiers in its longest war, and has spent more than $900 billion on everything from military operations to the construction of roads, bridges and power plants. Three U.S. presidents have pledged to bring peace to Afghanistan, either by adding or withdrawing troops, by engaging the Taliban or shunning them. Last year, the U.S. dropped the “mother of all bombs” on a cave complex.
None of it has worked. After years of frustration, Afghanistan is rife with conspiracy theories, including the idea that Americans didn’t stumble into a forever war, but planned one all along....

The entire article was a nice wrap, I thought.

And, perhaps as a fitting PS, there was this AP article about training Ukrainian children:


KIEV, Ukraine (AP) — The campers, some clad in combat fatigues, carefully aim their assault rifles. Their instructor offers advice: Don’t think of your target as a human being. [emphasis added]. So when these boys and girls shoot, they will shoot to kill.
Most are in their teens, but some are as young as 8 years old.