As a child, there was music in the house. Ours and many other record players by that time were electrified, though I wouldn't be surprised if someone told me there were wind-up players in some houses. Strauss waltzes wafted about from the 78 rpm records. 33 1/3 and 45's had not yet been invented. My mother read me Roald Dahl stories and unexpurgated Grimms fairy tales and all of "Frankenstein" ... and I wept for the monster who was the creation of the real monster.

Kissing a woman's hand was something to see in "The Three Musketeers," a movie starring Gene Kelly, who to this day I think of as the top gun screen dancer of the time (1940's). What grace he brought to the art. Far more compelling than Fred Astaire in my young eyes. Moved like the wind... a tea ceremony of dance. 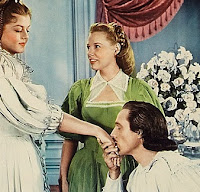 It wasn't until years later (1962) that I received any actual instruction on how to kiss a woman's hand in the upper reaches of German society. We were given instructions in language school in the army. And it was no simple matter.

First of all, if I recall correctly, you never actually kissed the hand. The man bent over as if in hand-holding obeisance. But at the last nanosecond he pulled away or risked getting hit by the woman whose hand he was 'kissing.' She, for her part of the choreography, would pull her hand away and if the man didn't get out of the way, he risked a bloody nose.

In an era of cell phones and declining civility, such memories seem bizarre and antiquated and a bit fun.
Posted by genkaku at 5:22 PM