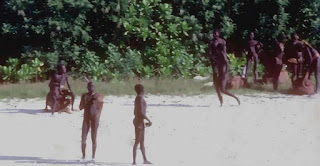 Indian authorities have been urged to abandon their efforts to recover the body of an American man killed while trying to preach Christianity to the isolated residents of a remote island.
Police in the Andaman and Nicobar Islands, an Indian territory in the Bay of Bengal, have made two boat trips to the area near North Sentinel Island since the missionary John Allen Chau was killed 11 days ago....
Police say they are consulting experts to decide whether it is feasible to retrieve Chau’s body, and will not provoke a confrontation with the Sentinelese, whose island is off limits to visitors without permission.

"Without permission" is apparently what Chau had in hand when he landed, no matter how benevolent his intentions. So, as a result of wishing to spread a word of mercy, he decided to endanger a people with his western benevolence and potential diseases.

I'm sorry, but I see no reason to forgive arrogance, even when it is cloaked in imagined virtue.

Here is a Guardian backgrounder.
Posted by genkaku at 9:42 AM