Passed along in email, some good, or anyway good-ish, news: 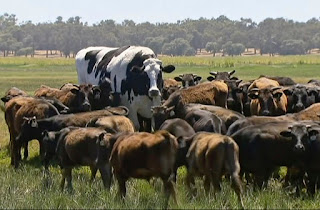 The world’s expectations for a hero have perhaps never been lower.
Which brings us to the steer. It’s like a normal steer, but bigger.
It’s a very big steer.
The very big steer is, according to the nearly unanimous acclaim on social media, a hero. At 6 feet 4 inches tall and more than 1.4 tons (2,800 pounds), it is roughly the height of Dwayne “The Rock” Johnson but weighs about 11 times more.