if I were a member of the Washington press corps 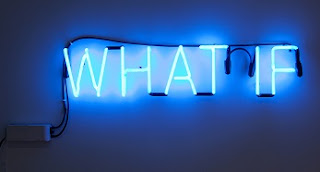 I suspect I am not alone in sympathizing with the supporters of Donald Trump who, from time to time, are seen uttering on TV some version of, “Yeah, we know he didn’t say that, but we know what he means.” Trump's angry and we’re angry – we get it.

Even the news media are wont to put their shoulder to this wheel as they ever-so-delicately try to unpack from Trump’s ungrounded outbursts and observations some rational meaning and direction. Promoting what they claim to disdain.

Yes, I am accusing the news media – which is between a rock and a hard place – of colluding to some extent with those whose hero currently sits on the presidential throne.

But like a lot of other Americans lately, I suspect what once might have been a rational or quasi-rational train of thought when it came to the issues of the day has descended into a quagmire of what-if’s.

It’s a throwback to the times when moms and dads read bed-bound children fairy tales and those children imagined … what if I were the prince or princess?

What would things be like if I belonged to the Washington press corps? What would I do? How would I react? What would I ask? Would I be decorous and polite? Would I call out what needed to be called out?

Would I name a lot of fancy names to prove I knew which famous buttons to push, which credibility to claim? As a former five-year newspaper reporter and 20-year stint in newspaper editing, I am a nobody on the great fame rainbow. But still – isn’t that like the rest of us great unwashed who sit around wondering what-if and getting progressively angrier?

What I would do/ask as a member of the White House press corps ranges from the impossible to the implausible, but since that’s what a Trump ascendancy has handed us … well, why not?
If I were a member of the White House press corps, the first thing I would do would be to try to galvanize the entire corps – a group that prides itself on protecting and informing the electorate – into boycotting the next official press briefing. En masse. Is that electorate served by the current press-briefing format? Would it be less well served if such a conclave simply failed to materialize?

This suggestion is clearly implausible. No media outlet would have the nerve. The man behind the news media’s green curtain is someone whose interest in democracy and the electorate relies on income. And if nothing happens, where’s the income?

But then there are the questions – however impossible – that might be asked.

1.   Mr. President, would you define “democracy” in terms of what it is and what good it might be to the United States?
2.   Mr. President, you have been voluble on the topic of “fake news.” Would you give a few examples of news that was not fake and in what way listeners might verify its truth?
3.   Is there a point of view you might not agree with and yet nevertheless be willing to engage?
4.   Do you consider yourself a responsible person? Based on what evidence?

There are others, but as I reread this thing, I realize it is going no where. I had thought it might be a newspaper column, but it’s too wussy for the big boys and too boring for the little ones.

I really would like it if the use of the word “democracy” were disallowed except in the mouths of those willing and able to define it in context.

That goes for everyone.
Posted by genkaku at 12:03 PM