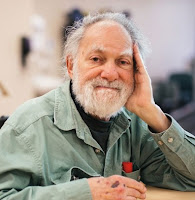 A friend sent along email word that Bernie Glassman (Roshi Tetsugen) died Sunday/yesterday at 79. Wikipedia entry is here and Tricycle notes are here. Wikipedia, while hasty, is a bit more abundant.

I feel, somehow, that I should feel more, but the plain fact is, I don't especially. Bernie was a slender thread in my memory cloth ... a part of the past. I met and chatted with him a couple of times in my Zen adventuring, but I didn't take to him much. (Full disclosure, I was no doubt an even thinner thread (if thread at all) in his memory banks.)

Bernie had long been filed in my mind under "macher" -- a hubba-hubba business man whose teacher, Taizan Maezumi Roshi, was said by rumor to be pleased as punch when Bernie moved himself from Taizan's West Coast and took his business interests with him. Bernie became an unqualified success on the East Coast. True tales, false tales, true rumors, false rumors, true labels, false labels, Zen labels, no-Zen labels ...

Bernie is a small thread in my memory weave. Another thread down. He once, when I mentioned wanting to change my Dharma name, offered to do exactly that. "I can do that," he said. But I demurred with a thank you. Somehow he didn't feel right/credible to me.

I have no doubt he did good stuff. Probably bad stuff too, since it comes with the territory. But I don't much care except to the extent that another thread in the weavings of my past has been removed. My palette of memory is now missing another small bit of hue.

I hope he is happy ... the same hope I have for anyone who has joined the majority. I am mildly weakened, but I suppose it's not the end of the world. From color to tinting to sepia to black-and-white -- that's the way things go these days.
Posted by genkaku at 11:29 AM