in the high chair 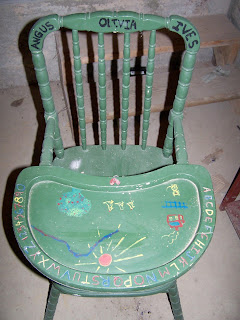 When my kids were little, each of them took a turn in the high chair. It was there that they were safe from falling and where the mess could be concentrated as they ingested whatever it was they did not spill.

It was there that big pieces could be cut into little pieces, where the world of nourishment was close at hand, where what might later become complex and huge was made small and manageable.

I had painted the high chair green, carved letters and numbers on the tray's perimeter and made inept little pictures for them to absorb while in the midst of fruit or meat or vegetables or popsicles... little bits of the world that awaited their later competence.

Now it sits in the basement gathering dust, as if everyone had outgrown it.

With Twitter and Facebook and other bits of high-chair-oriented snippets of a real world, sometimes I wonder if any of us ever makes it out of the high chair.

No one wants their kids to choke. Everyone knows kids make a mess. Let's minimize the dangers ... keep everything safe and small ... and let them choke in their own time.
Posted by genkaku at 9:40 AM