As if to prove that the weather service were right from time to time, five or six inches of snow have fallen on the neighborhood, wrapping themselves with a perfect gentleness around every object they encounter. Streets and bushes and cars and roof tops ... no matter... the blanket accedes to the sleeper's need.

In Japan, I once heard, white is a color of mourning -- white for funerals and other sharp slivers of sadness. I don't know whether this is true, but my mind sympathizes with the notion. 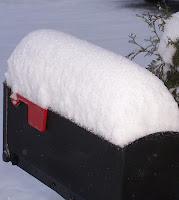 White, like zero, is the purest pure -- the sine qua non that defies all comers and yet is as imposing as a Dumpster. Fine artists would lose their way without white and yet of itself, white D-double-dares in the way that a flame might dare a moth ... so magnetic and needed and yet come too close and it will burn your face off. Perfect ... and in that perfection, boooorrrrrring.

Like some starchy nun, white purely begs to have mud cast upon its skirts. It cries out for the one daring enough to throw a lemon meringue pie in its face. White is the still, smooth lake at sunrise -- the time and place that waits without complaint for some small boy with his perfect skipping rock.

White throws nothing of its own and yet throws onlookers back on their cobalt blues and lime greens and alizarin crimsons. Like religious precepts, white loses its meaning without the fuck-ups and wondrous fantasies that attend upon it. And yet there is some yearning to speak its name, to lead it to some mental corral and speak softly and offer it sustenance and claim it. White is something, isn't it? It must be something ... and yet my 'must' falls on deaf but not unkind ears.

Where, as this morning, all things are white, how can anything be white ... anymore than the black of deepest space could possibly be something as credible as "black?"

The sadness of Japan (if true) makes sense to me -- a sadness tinged with some whispered joy ... sort of the way the Japanese fall out for cherry blossoms in the spring and weep on occasion because ... because... because...

Weeping, like white, has its own reasons and were anyone to know them, that would be truly sad.
Posted by genkaku at 7:46 AM