Defined in part by an Internet dictionary, the adjective "private" means

-- used only by a particular person or group, or available only to them
-- used about places or situations where other people cannot see or hear you
-- understood by only a few people, not by everyone
-- a private person does not talk to other people about their personal life and their feelings
-- not connected with someone’s work or their public position
-- controlled or owned by individual people or companies, rather than by the government
-- with no position in government or public life 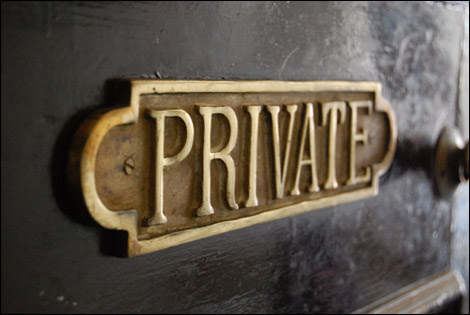 People "value their privacy" or "keep some things private." It can be a pretty serious matter taken pretty seriously. Power and protection -- perhaps these are the cornerstones of privacy: Offensive or defensive perimeters.

I always liked Zen Buddhism for the fact that it can offer a space in which privacy can dissolve. That strikes me as healthy because not only do people keep some matters private from others, they also keep them private from themselves ... and the fortifications that advance or defend some realm inevitably turn into burdensome barriers. Burdens are heavy, and as a hiker might set down his backpack with relief, so a space in which to set private matters down ... well, it strikes me as healthy to know that such burdens are choices. Put it down, pick it up -- your choice.

To find a space in which necessitated burdens are not so necessary ... what a nice gift anyone might give to him- or herself.