Of all the scary group-think organizations I can think of, perhaps the Taliban with its white-knuckle applications of sharia law is the spookiest. What I find spooky is the willingness of an organization which lays claim to furthering the will of Allah to impose that vision on others. Girls shouldn't go to school, statues should be eradicated ... whatever their strictures, they are very strict, carry punishments with them, and are not convinced enough to let others convince themselves. 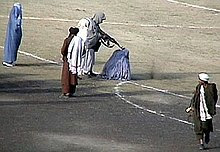 But what scares the crap out of me about the Taliban is not something unusual ... it is the usualness that makes me cringe. It is easy enough to point out the similarities to be found in other organizations or individuals -- a strict adherence to some god, some activity, some way of being, some set of opinions or beliefs. There is comfort and cohesion to be found in the strictures of, say, the Vatican or marriage or the military or political purity or much-announced homosexuality or the Ku Klux Klan or shopping at Macy's or ... well pretty well any social construct.

In the mind, the castles arise, well-mortared and often well-protected, and there is peace throughout the land ... social stability, kinship of a sort, and interlopers are kept at bay.

But there is always a price and that price is that the land was peaceful before anyone started building castles. And so, having built the structures of social stability, their most useful function is to point out the lands beyond the castle walls, the stuff outside the well-mortared box.

In Buddhism, the prince left his castle behind and wandered from one castle -- one spiritual persuasion -- to another, seeking peace of mind. And metaphorically, I think this is true for individuals as well: The stronger the walls, the more insistent is the whispering beyond those walls: What is it, after all, that made these walls important in the first place? Does that importance accord with anything that might resemble an honest peace? It is just a question ... no criticism necessary.

In times of war, bunkers offer wonderful protection. And sure enough the world is full of one kind of war or another. But also, a bunkered life cries out against its constrictions, its safety, its manufactured battlements of belief and philosophy. How many people, for example, are willing to pay major money to take a break in an environment without televisions, computers and cell phones? The less-well-heeled may choose other ways in which to step outside their boxy castles ... but whatever the way, still there is the impetus... what are things like without the walls of right and wrong, holy and unholy, ersatz peace that seems incapable of providing some real peace.

Yeah ... the Taliban are a spooky group in my mind -- cruel and mean-spirited in asserting a righteous and compassionate path.

But I'm pretty spooky too. In my own defense, about the best I can say is that I don't own a literal AK-47.
Posted by genkaku at 7:46 AM