silence and the unicorn

Shy and yet inescapable, silence beckons to mystics and others suffering from imaginative longing. Noisy praises litter its path like rose petals strewn before royalty and yet all the traps in the world cannot bring it to heel. What is this need to capture and confine and ballyhoo that which is inescapable? 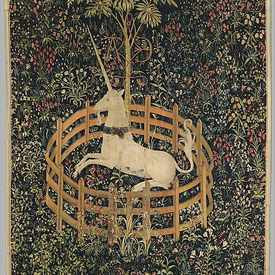 Wikipedia says of the mythological unicorn, "Until the 19th century, belief in unicorns was widespread among historians, alchemists, writers, poets, naturalists, physicians, and theologians."And belief in silence is more widespread still and has a longer history than even a unicorn ... as if some word or act might capture its truth.

Not even a virgin -- the capturer of unicorns -- can capture silence, since any attempt -- the slightest breath --  sends it slipping away between some distant trees.

Impacted minds are bound to try ... try, try, and try again ... go to the middle of a lifeless desert; stand atop the tallest peak; sink beneath the deepest wave; travel to darkest, darkest space; weave another virtuous hymn or self-help nostrum ... silence does not accede to and will not be tamed by virgins or any other amateurs, whether spiritual or scientific.

What a marvel, this whatever-it-is that cannot be had and yet cannot be escaped.

Yet turn the corner of some accidental delight and come upon a festival of dance and laughter, and there they will be, as sure as sunshine ... the unicorn and the silence, dancing and singing, as raucous as the rest.