coping with the kids 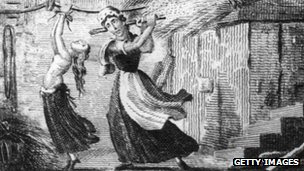 In the 14th and 15th and 16th centuries, northern Europeans had the habit of sending their children to live elsewhere. Perhaps as early seven, but probably more like around 14, many people, of all classes, placed their children with others while likewise taking such children from elsewhere in.

Part of the underlying reasoning was that children could learn more in a setting or place of apprenticeship that was not "home." Thus, it was 'for their own good' in one sense. Additionally, because the Black Death of 1350 had wiped out about half of Europe's population, kids were a cheap and necessary source of labor. The situation was not utterly barbaric in one sense and yet, in another, perhaps it was.

Literacy was not the norm at the time, so the evidence of trauma or discontent in this social system seems to be patchwork at best, judging by a BBC magazine article on the topic. For all that, it is a tantalizing to refocus the latter-day assumptions about child-rearing and social outlook.


According to social historian Shulamith Shahar, it was thought easier for strangers to raise children - a belief that had some currency even in parts of Italy. The 14th Century Florentine merchant Paolo of Certaldo advised: "If you have a son who does nothing good… deliver him at once into the hands of a merchant who will send him to another country. Or send him yourself to one of your close friends... Nothing else can be done. While he remains with you, he will not mend his ways."


Some insight into how such a boy or youth might be trained comes from the [14th Century] French hunting treatise La Chasse by Gaston count of Foix... A lord's huntsman is advised to choose a boy servant as young as seven or eight: one who is physically active and keen sighted. This boy should be beaten until he had a proper dread of failing to carry out his master's orders.
Source: "Medieval Children" by Nicholas Orme

And:
Feed 'em less, work 'em hard ... how much easier to do with children who are not your own ... and all in a world that had not yet met Sigmund Freud or Carl Jung ... when trauma existed but there was no one to acknowledge it with apparent fervor. Trauma, schm-auma ... get to work. Everyone's sad ... tough titty. How many silent tears must have fallen to the resounding chorus of "who cares?"

I wonder if, out of this and similar social attitudes, institutional religion didn't gain a savvy and compelling foothold. What a great power base! ... at last, someone cares! What a terrific ploy for anyone wanting to cement an institutional ascendancy... acknowledging trauma or hurt where no one really had time for hurt and trauma.... a world without "psychology." Imagine -- in a world where "no one gives a shit," suddenly someone does give a shit or anyway says s/he does. Woo-hoo for God!

Of course, there must have been many instances of caring and nurture and sympathy that existed in other times. But when the social fabric is largely based in concrete facts on the ground -- food, shelter, commerce -- the delicacies of kindness and caring are luxury items.

Reading a story about dealing away the children may arouse a sense of "how far we've come" -- a kind of self-congratulatory thankfulness that what must have been trauma and hurt are no longer dealt with in so cavalier a fashion. And yet...

Anyone who has been in an emergency situation -- a car crash scene for example -- knows that in order to offer effective assistance, emotion has to be put on hold. "Ain't it awful" does not extricate those who are trapped any more than it binds literally bleeding wounds. Sympathy and empathy don't get the job done and an emergency demands effective, no-dithering action. "Ain't it awful" is for those who have the luxury of time and emergencies don't respond well to well-intentioned emoting. If you really want to help, then shut up and get to work.

But this attitude too can lead to tears wept without succor. Think of the combat soldier who is repeatedly forced to lay hurt and trauma aside in aid of his combat mission. Over and over and over again, the horror and tears are put on hold until, perhaps, they can no longer be put on hold and the military suicide rate begins to rise. And there are other, less exciting, versions of the same thing in anyone's personal life ... putting aside what is part and parcel of this one whole life in favor of something else. Putting aside and putting aside and putting aside until ....

Well, who wouldn't thank God for God? Who wouldn't delight in the notion that life would not send them into strange and unloving lands? Who would not cry out for a home that could not be wrested from their grasp?

I suppose the world is a more grown-up place since children were packed off to other homes, apprenticeships and unrequited tears.

But I wonder how grown-up that world has actually become.

Where barbarism is the norm, is it any longer "barbarism?"

Where kindness is the norm, is it any longer "kindness?"

These are questions no "norm" can answer satisfactorily, I imagine.
Posted by genkaku at 9:29 AM