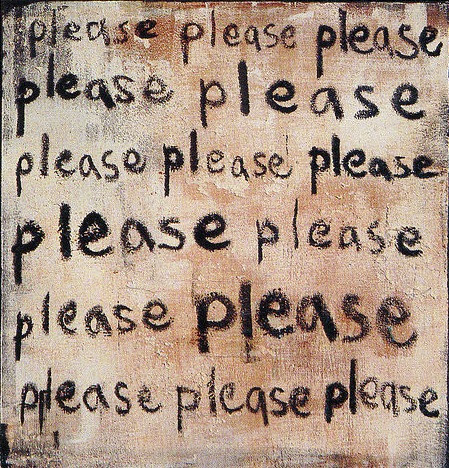 Even this morning, after what I consider proof to the contrary, I am still deeply skeptical about the predominantly pink people who set their conversational tables with the words "healing" and "closure." They strike me as egregiously icky, as if speaking from some serene and knowledgeable place when all the time they are either trying to sell their latest book or convince themselves of how damned compassionate they are.

This scenario, whether true or not, infuriates me because the horrors to which "healing" and "closure" might apply are searing and real ... and there is something hugely indecent about applying treacly words to a man who is burned over 70 percent of his body, whether within or without.

Yesterday, I had lunch with Michael Erard, a one-time Vietnam-war army medic I met several years ago when he wanted another pair of eyes to look over a piece of writing he was trying to do -- a memory of a wracking time during the war ... a war that had come back to haunt him.

When he first told me the tale, sitting at the other end of my couch, it didn't make me weep out loud, but inside I was left writhing in tears. I did what I could to offer constructive criticism of the piece (which was a little disjointed), but was secretly overwhelmed by the experiential horror it represented. These were words about a man's life, for Christ's sake! Who was I to tinker with a body so badly burned?!

Anyway, yesterday, Michael invited me for lunch and we chatted here and there over scrambled eggs, small spicy sausages, good bread and orange juice. And I could not help but ask him about the events that had initially brought us together. How did he feel these days about the ancient wounds that had come back to bite him and maim him and tear flesh from flesh?

And here's where things get a bit oozy-goozy -- not at all scientific and open like anything other human intercourse to camouflage and self-deception. But as Michael responded, I watched his face and it seemed to me to be at ease. I listened for the tell-tale signs of the medical professional who can cloak assessments in a so-carefully-crafted-that-it-has-become-second-nature distant calmness.

And the sum total came to ... I believed it. Michael could call up the memories when he wanted and sometimes they came back unbidden but they were part of the scenery now. Sad was not so bad, not so sad. The sadness no longer owned him or, when it did, he was able and willing to give it room to breathe. I believed ... and my heart soared like hawk.

We chatted a little about what had made it all possible and were left speechless -- two old farts surrendering to phrases like "time heals all wounds" or "it was the grace of God." Both of us, I think, marveled that a healing (for lack of a better word) had occurred when there were so many -- so very, very many -- for whom "healing" and "closure" were just the words on pink people's tongues or a  wishful advertiser's scream for relief.

A small, obstreperous voice within still considers the word "closure" an asshole bit of disingenuousness. Closure suggests that "the end" had an actual-factual meaning. Nothing within is ever closed, short of a lobotomy. But there is a difference between owning the horror and sorrow and being owned by them. There is no magic formula, no magic wand, no sure-fire course of action that will assure a happy outcome, but that doesn't mean happy outcomes aren't possible ... or, as I came to believe yesterday, factual.

Does time heal all wounds? Is the grace of God for-real?

Snake-oil salesmen are a dime a dozen. Pink-people verbiage is inescapable ... and ruthlessly referred to as hope.

But I can say what I came to believe as fact yesterday.
Posted by genkaku at 9:36 AM