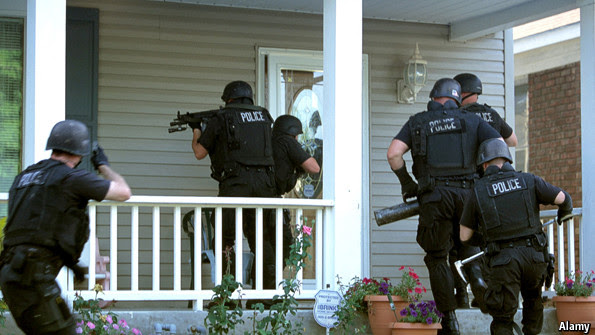 Passed along today in email was this Economist article that assesses the blurring of the lines between police officer and soldier ... the rise of fire power and fiery tactics when dealing with crimes of ever-diminishing seriousness. (There's an Economist video for those disinclined to read.)

Supporters of the increased muscle point out that critics have a tendency to cherry pick the incidents in which hapless citizens are suddenly confronted by well-armed SWAT officers. But police are less than transparent when it comes to reporting the full scope of their SWAT assaults ... which makes it hard to know if the cherry picking is actually cherry picking or if it is turning out to be a more generalized ratcheting up of self-important autocracy.

In the United States, "The number of SWAT deployments soared even as violent crime fell."

One thing's for sure, SWAT tactics have brought home the bacon ... often from people who cannot afford the thefts to which they are subjected:


Because of a legal quirk, SWAT raids can be profitable. Rules on civil asset-forfeiture allow the police to seize anything which they can plausibly claim was the proceeds of a crime. Crucially, the property-owner need not be convicted of that crime. If the police find drugs in his house, they can take his cash and possibly the house, too. He must sue to get them back.
Many police departments now depend on forfeiture for a fat chunk of their budgets. In 1986, its first year of operation, the federal Asset Forfeiture Fund held $93.7m. By 2012, that and the related Seized Asset Deposit Fund held nearly $6 billion.