no "then" in laughter 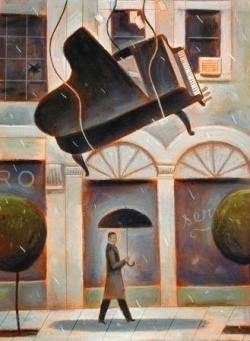 When it comes to smugness, is there anything more compelling than memory?

Memory arrives with the certainty of a grand piano dropped from a third-story window. It is as crisply-creased as an origami swan. It is whole and true and certain ... and yet, reaching back through the intervening passages of time, it is invariably mistaken.

But don't tell that to someone in the throes of memory!

It's not as if memory were entirely composed of snare and delusion and blur. It is simultaneously bogus and quite informative. Yet which is which is up to the one whose memories insist.

As a teenager just gone off to college, I was delighted to discover something called "philosophy." Somehow I had not realized up until that time that there were other people -- indeed a whole academic persuasion -- who were interested in what I had been interested in for some time ... secretly and without any awareness that others might think similar thoughts.

The very first philosophy lecture I attended was held in a small, packed auditorium. I guess it was some sort of broad-brush welcoming ceremony to those newcomers who had chosen to take philosophy classes. And there, for one hour, the president of the college gave a lecture on a piece of chalk. One hour ... a piece of chalk ... and I was utterly mesmerized ... and delighted ... and strangely relieved: I was not alone and more than that, there was a social system that embraced and adored what I too adored ... or at any rate could not escape.

What teenager does not yearn for a home after s/he discovers that somehow the home of childhood is coming apart at the seams? Where certainty frays, the need/insistence on some equally powerful certainty erupts. Gimme answers! ... or, if not exactly answers, at least the sense of security and belonging that once was so blithely assumed.

I wallowed in philosophy. And not only did I love it to death, I also seemed to be pretty good at it, given the initial grades I got. How reassuring was that?! -- to love something and be loved in return.

It was not until the second year of philosophy classes that my infatuation was tested, if not blown to smithereens. Philosophy is wonderful stuff ... right up to the moment when life goes "boo!"

The proximate crashing of my house of cards may seem childish in retrospect, but it was nonetheless real and compelling from where I sat.

The class had entered a world of thinkers whose baseline premise could be summed up with the assertion that "everything changes." I can't remember the school of thought, though William James seems to stick in my mind.

Anyway, if philosophy in general delighted and warmed me, "everything changes" grabbed me by the visceral throat: This was plainly true in very real, very concrete terms. It applied when walking around campus. It applied during a snowball fight. It applied ... well, everywhere and always and "everywhere and always" is important to someone longing for answers and security and a home. I stuffed "everything changes" into a secure place in my mind and heart ... a touch stone, a friend, an accomplice, a certainty. It was, for a day or two or longer, pure heaven.

And then ... and then ... and then, as surely as "everything changes" had grabbed me by the throat, it occurred to me that "everything changes" must likewise apply to my girl friend of the time. I was ass-over-appetite in love and the idea that this consuming, gut-level love might somehow be reshaped or revised or reconfigured or -- god forbid -- reversed was not possible! No! No! No! No! This love was irrevocable and enfolding and informing and necessary ... in no way could it possibly change!!!! It was a personal apostasy I could not allow ... and yet, by loving "everything changes," was forced to allow ... an inescapable apostasy. It wracked me.

At this juncture in recollection, I can hear the gentle, parental chuckles, my own included. But how different was I, as a wobbly teenager, from the activism-prone, politically-keen, religiously-invested, athletically-endowed adults of later years? Not much is my guess.

The fact that I cannot remember the face or name of the young woman I was so attached to says something for the infuriating and wildly perplexing vortex that surrounded me at the time. It tore me up ... and my search for some rich and restful assurance began again. Somehow that quest, at whatever age, was unending... but the particulars of that search, as they came and went, refuse to come into perfect focus. I wonder what her name was.

"Everything changes:" How many cling to that ancient home with needy, savvy fingers? How many claim their rest and respite in its over-arching aptness? Are they any better than a wobbly teen-ager confounded by love? I doubt it.

It wouldn't surprise me to imagine I learned a lesson from that carelessly recollected adventure... something about the implacable nature of "everything changes" and the need to become strong in the face of it; to grow callouses; to man up; to learn to withstand what rained down like lashes; to become unflinching as a Spartan sleeping naked in the snow; to get real and realistic. The fact that such an attitude won't work ... well, that came later. Concocting an ability to find a home within the realm of "everything changes" is no better than praising the light by cursing the darkness... or being in love with a girl whose name I can't remember.

"Philosophy" and "religion" and "home" and "everything changes" ... how much does anyone's life rely on a blurry and blurred memory?

Living in the past is a risky business, to say the least.