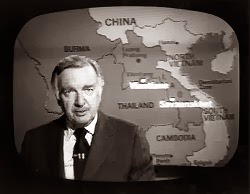 The American TV newscaster Walter Cronkite once observed approximately that "news isn't about all the cats that didn't get stuck up on the garage roof."

In other words, roughly, all news is bad news.

But since life does not consist in news that is perpetually bad, it makes me wonder at the wide-ranging importance anyone might give to the news as it appears on the TV or radio or Internet. Not that it's bogus or false or unworthy of attention, but rather that it is verifiably incomplete and therefore worthy of a grain of salt.

Silly-fashion, it occurred to me:

There is good news and there is bad news.

The good news is that there is no bad news.

The bad news is that there is no good news.

Or is it vice versa? I'm not quite sure.

Today I have to work on a newspaper column I would like to write. It's about cussing and I enjoy the topic, but the project is somehow daunting: Cussing may be human and occasionally titillating, but it's a bit like one of the cats that didn't get up on the garage roof. Writing about cussing is not as easy, say, as writing about the starving Syrian refugees in Lebanon or the cruelties of income disparity or the hypocrisies of religion. Nevertheless, I seem to have set myself the task and will see it through ... which looks like quite a lot of effort just at the moment.