wrapped in a wet sheet 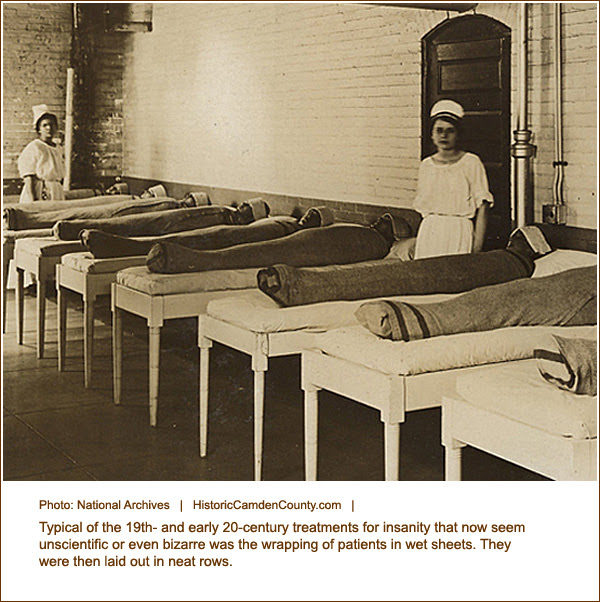 In the lackadaisical fashion of the Internet -- too lazy to research the assertions and imaginings put forth -- my mind skips across the waters....

There was a time when obstreperous mental patients were wrapped in a wet sheet as a means of curtailing their flailing craziness. Their 'care-givers' thought it best to assert another way of being, a saner, less-disruptive state that accorded more with an acceptable social world.

Wrapped in a wet sheet.

It was best for the patient.

But imagine how the patient must have felt ... immobilized when every fiber of the human frame, whether sane or insane, called out for movement and action and exercise and assertion. How must it have felt when at last -- if ever -- the sheet was removed?

The late 17th and 18th centuries are sometimes referred to as the "Age of Reason," a time when intellectual soaring burst forth like a flower after centuries of wet-sheet dogma. Bit by dancing-in-the-streets bit, it was OK to think, to postulate, to question, to assert, to review. In England, in France, in the United States, philosophers and scientists sprang up like weeds. In France, a doctor whose name I can't remember performed an careful autopsy on a body and announced that he had found nothing that could be called a "soul." In my mind, the age of reason/enlightenment must have been like a joyous block party or the revelers who met in Times Square at the end of World War II ... Jeeeeesus! What an exhalation of jubilation to be unwrapped and the wet sheet cast aside!

After the inferno of World War II (1939-1945), a time when millions upon millions had been seared and deprived and desperately saddened (real people, not just history), who would not wish for a stabler time -- a time of enough food, a time when bad news was not a daily drumbeat, a time of comparative sanity after what could only be called a vast insanity in the mind? Who would not bless and be blessed by a bit of front lawn, a white picket fence, a time when women tended to kids and kitchen and men went to work and washed the car on Saturday mornings? The wet sheet of war had been removed. There was something that, if not exactly peace, was still enough like peace to latch onto and be grateful for.

But after a spell of no-wet-sheet relief and stability, along came the 'Beat Generation' of the 1950's and the Hippies and Yippies of the 1960's. The wet sheet of white picket fences, of conforming suburbanites, of lock-step thinking and belief ... well, it was smothering, constricting, intolerable, unimaginative. Individualism danced in the streets, went psychedelic, and disassembled the reconstructed peace of the past. No more constricting wet sheets! Give me f-r-e-e-d-o-m! And the freedom that emerged echoes into the present, not least in a deteriorating public school system.

Not as if it were escapable and  not as if it were somehow a less-worthy event, I wonder to what extent this ebb and flow -- from wet sheet to jubilation and back again -- is part of the human story ... not better or worse, but worth noting. Marriage is wonderful until it becomes constricting. The job is perfect until its prices become known. A dream vacation turns out not to be The Dream Vacation. The spiritual effort that promised to free and ennoble evolves into little more than the shackles of a slave.

Yes, there is dancing in the streets and the sense of exuberance is compelling, but to what extent can this be called something other than wet-sheet freedom?

The French doctor found no such thing as a soul.

And ever since, people of good will have insisted that that soul, however ineffable, is fershur ... just like freedom.

A curious kettle of fish.
Posted by genkaku at 9:29 AM