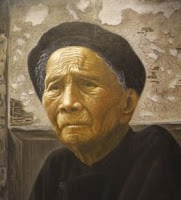 It just seems to be one of those human phenomena -- what initially gained currency based on love and concern and perhaps a bit of fear runs out of lovable credibility and is transformed into an arm-twisting ritual, one in which children and 'ignorant' adults are trained to do the 'right' thing because ... well ... once it was loved and that love is irrefutable in its benevolence.

Think of the Saturday-morning Christian door-knockers. That suggestion may not be quite fair since Christianity is not yet mature enough to sidestep its mandate to convert others, but it gives some sense of the phenomenon: I'm going to convince you for your own good ... of which I am more aware than you.

In China, a beauty salon chain has implemented a policy of deducting from employees' wages and sending the money to aging relatives. The object of the exercise, which has excited some discussion, is to instill "filial piety," which China claims to revere. What was once borne lightly becomes a should-do burden: What was once love is now enforced.

Morality dwindles into ethics. I suppose it is possible to teach someone to love but it has a tinny, rigid ring to it. Love opens its arms to enfold and embrace and the training closes those arms as a means of opening them. Goodness and peace are praised and in that praising goodness and peace go begging.

On the other hand, there is the tale of the professional mourners (in China, I think, but maybe Japan). These are the women hired to stand at the grave site with the bereft and stunned kin. The women are paid to keen and cry. Their wails fill the air until, at last, those whose grief is bottled and incomprehensible find the mechanism with which to free their own sorrow.

Your life, your choice.
Posted by genkaku at 7:05 AM