THE HAGUE, Netherlands (AP) -- Dutch police say two tigers have escaped from their enclosure at a big cat sanctuary and are prowling around the terrain of the park in the northern province of Friesland.
Police spokeswoman Nathalie Schubart says police officers and a vet have the animals in sight and are trying to tranquilize them as the sanctuary's outer fence is not fully secure. 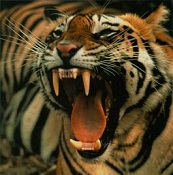 For reasons not entirely clear to me, this small story puts me in mind of the political train-wreck referred to as the presidential primaries here in the United States. Certainly the Republicans, who find themselves reaping what they sowed over the last eight years, have got a wild card on their hands with Donald Trump -- a man of no credentials, and much self-involved passion. If you tie up a wild animal, you can hardly be surprised that it will do what it can to escape. But the parallel really doesn't hold much water. Trump is leading the charge in the effort to create a third-world entity out of the United States. There are simple answers to complex questions and, if there aren't, he can say "my bad" and find forgiveness among his supporters. Trump stands for nothing, but the cheers are gratifying.

Trump may irritate lefties like me but that's too simple. He's a somewhat bedraggled tiger that nonetheless has teeth and claws. He lacks honor -- the willingness to lead from principle -- but expresses a public sense of frustration born largely out of the Republican desire to block everything and anything suggested by the (unstated) head nigger, Barack Obama. Bernie Sanders taps into the same sense of helplessness and anger but offers a vision, like it or lump it. And Hillary Clinton, the Democratic presidential nominee in all but fact, exudes a persona of "same shit, different day."

But all of them have claws and teeth. It is very tiring. When was the last time the Republicans put forth a program or vision of their own? To attack is easy. To envision is risky. And the whole thing is a crock of shit since the American government is tri-cameral and the president can dream all s/he likes, but no one knows what the Congressional or Judicial future holds. Tiring and uninspiring. The tigers may be bedraggled and house-broken, but caution is required: The impinging return of feudal hierarchy lasts for a while ... and then the slaves have had it.

Tired ... won't someone please say something sensible about the possibility of fixing the roads?

Naw ... it's only newsworthy when the tigers are loose.

As one voter, I've got to say I'm sick of dishonorable people. But I won't say that ... that would play into the tiger's game.

I'm lousy at politics.
Posted by genkaku at 8:22 AM