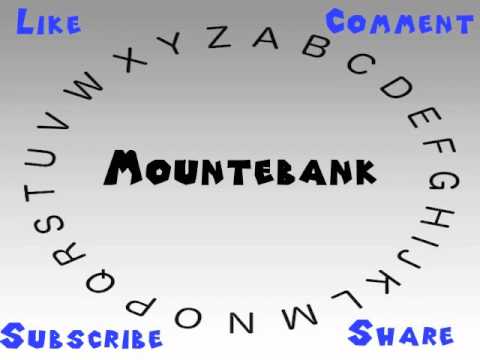 Decorous and now damn near defunct, the word "mountebank" rolls around in the mind like a pretty good piece of bubblegum... it's got a lasting flavor, but who chews bubblegum any more?

Once upon a time, a "mountebank" was, according to an Internet dictionary, "a person who deceives others, especially in order to trick them out of their money; a charlatan." And Wikipedia provides a chart that gives some evidence of the word's diminishing currency

I like the word "mountebank." Probably it's partly a function of age and once-learned vocabulary, but also I wonder why. Why does this sense of warming 'yummy' whisper from the wings? Why not just be content with a "fraud" and have done with it?

And I guess the answer is mostly that I like the cocoon of trust and back-story that "mountebank" once implied in my mind. No need to be j'accuse insulting. Just mention the word "mountebank" and those in my neighborhood could fill in the blanks for themselves and, most important, agree with me ... this guy or gal being assessed was a fraud and a blowhard ... gently spoken ... easily dismissed.

But that agreement is now worn out. Given the amount of information available, it might almost be asked these days, "who is not a mountebank?" And with that question, the comfort of society is frayed. It's an age thing, sure, but the quiet decorousness of the once-upon-a-time is lost and -- ergo -- I have lost my social footing.

What once was a "mountebank" is now a turn-up-the-volume accusation. Everyone wants to be heard on the topic of idiocy and chicanery but the volume does not assure the social fabric or the fact. And it's the same for those who don a mantle of reasonableness. Bleah ... writ loud. Lies are OK because, what the hell, everyone lies. Never mind that the human stakes might be high -- it's my volume-up opinion that counts.

I still like the word "mountebank," but I miss the social cohesion it once posited for me. I miss my trust.