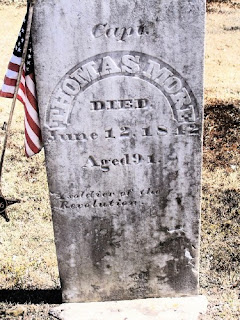 Appearing today in the Daily Hampshire Gazette under the title "Our Selective Memorial Day Memory:"

A couple of years back, my sister took to emailing me bits and pieces of family history. For a while, it was like eating potato chips, but in the end my genealogical interest flagged: It might be interesting to know the employment and offspring of one forbear or another, but it didn't tell me what I really wanted to know: What made these people laugh; were they yo-yo champs; what demons haunted or delighted them; and how did they react to a fart under the covers?

These are impossible questions to answer and yet without answering them, how much could I really know about "where I came from?" And it occurred to me that genealogy, and by extension history, was a study whose particulars were paradoxical: The more you learned, the more you became aware of what you did not know.

Today is Memorial Day. As ever, the day is dedicated to those who died while serving in the country's armed forces. The day is often draped with words like "patriot" and "hero" and "glory" and "courage" and  "sacrifice" and, yes, even "love." In passing, someone is likely to mention the "sanctity of human life." Meanwhile, those who stood on the battlefield might wish desperately that they could forget what others attempt to remember today.

American military adventures include, but are not limited to, the Revolution, the War of 1812, the Mexican-American War, the Civil War, the Spanish-American War, World War I, World War II, the Korean War, the Vietnam War and various interventions and invasions in the Middle East. Each was supported in its time by a reasoning that involved the human capacity to forget.

Yes, there were a dizzying number of reasons to fight, but was that an excuse to forget the genealogy of war that preceded it? Was a battle-tested soldier like Napoleon Bonaparte wrong when he observed, "If you had seen one day of war, you would pray God that you might never see another?" Was Gen. William Tecumseh Sherman just blowing boozy after-dinner cigar smoke when he said bluntly, "War is hell."

If history is any guide, these men were not wrong, but hell is pretty damned tempting ... again.

Memorial Day's broad-brush capacity to selectively remember the dead and implicitly extol the ideas that led to those deaths leaves out the fathers and mothers, sisters and brothers, spouses and friends who survived and mourned and were shredded by a bloodshed far from home. It leaves out the veterans who hang themselves in basements. It leaves out the silenced screams of the mother who was quoted as saying of her own son, a Vietnam War veteran, "I sent them a good boy and they made him a murderer."

On Memorial Day, with its long history of forgetfulness, what person in his right mind would imagine that peace is the absence of war? Genealogically, war is easy to grasp and chart. Peace – the stuff any man or woman might long for – remains wispy and hungering, a personal responsibility almost too enormous to bear. This is a realm in which the communist dictator Joseph Stalin's words ring true: "One death is a tragedy. A million deaths is a statistic." No one wants kith and kin to be counted as a statistic and yet Memorial Day is rife with statistics that cannot paper over the longing for peace.

Take Capt. Thomas Moore. Moore died in 1843. His gravestone stands tall in the Gate Cemetery that bellies up to Ireland Street in West Chesterfield. Moore, the gravestone announces, died at 91 and then, as if to differentiate this man from his genealogy, goes on to send a Tweet to future generations: "A soldier of the Revolution."

Moore did not die in battle but rather in the fullness of years. Still, he thought enough of the American Revolution (1775-1783) and those who did sacrifice their lives to remember them in his final farewell. He would have been between 23 and 31 during the Revolution, just about the age young men and women still go off to war today.

But second, why, in 91 years, would Moore's gravestone choose to pass over the other 79 years of his life – the times of peace, perhaps ... a time in August when the cut grass hung heavy in the air; the time when, at last, he learned how to spell "Egypt" correctly; the lingering, heart-skipping moment when he noticed the blue ribbon that bound up her hair; or the single, gentle finger that wiped a bit of drool from the cheek of a baby sleeping in his arms?

Cruelty and sacrifice and bloodshed and loss are part and parcel of Memorial Day. However imperfectly, the living remember what the dead have long since set aside. But what is peace? Perhaps, to borrow from a Supreme Court observation about pornography, I may not know what peace is, but I know it when I see it.

Somehow, on this Memorial Day, I feel it is my responsibility to bring the same fierce loyalty to peace that is so often reserved only for bloodshed.

Adam Fisher lives in Northampton. His column appears monthly. He can be reached at genkakukigen@aol.com.
Posted by genkaku at 5:32 AM