"ignorance is not a virtue" 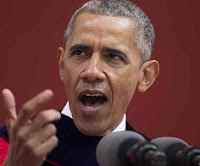 Imagine that -- a president of the most powerful nation on earth finds himself apparently constrained by current social and political circumstances to underscore what any half-decent educational arena might consider an axiom ... and yet the axiom appears withered and wan: This is a time -- and I don't just mean Donald Trump -- when ignorance is a virtue ... perhaps because it is so much more comforting.
Posted by genkaku at 9:05 AM