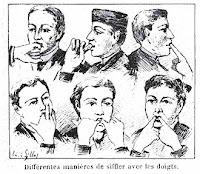 I seem to remember that Enrique came from Mexico, but when you're a kid, where someone comes from is nothing notable. What was notable about Enrique when I met him in grade school was that he knew how to whistle loudly -- as for example when summoning a cab or cheering a team -- and I wanted to be able to whistle shrilly as well. Enrique taught me.

It started by sticking the two forefingers in the mouth. By the time, months later, that it ended, I could do it without using my fingers. In between, there seemed to be endless amounts of spit that dribbled down my chin and fingers as I tried to get the placement just right. It was the kind of kool thing a kid wanted to be able to do and, after a lot of practice, I could do it.

Whistling and spitballs were part of my upbringing. In high school, there was a fellow who took professional whistling lessons. At first, I thought that was pretty nerdy, but when I heard him whistling a complex tune, I changed my own: This was beautiful.

Whistling: Does anyone do that any more?

Spitballs: Does anyone do that any more?

Of the former, there is still an annual competition and even a language in the Canary Islands. There is good luck and bad associated with whistling. There were "wolf whistles" when a pretty girl passed by. But I can't remember the last time I heard someone whistling a tune or whistling one myself.

Of the latter, Google serves up a disquisition on the illegal spitball in baseball. But it does not immediately take up the use of rubber bands to propel a (sometimes chewed) bit of paper at a classmate. The ability to zing a classmate without getting caught was a prize possession. Teachers frowned and orated, but hell, teachers frown and orate as a matter of course. There's nothing new in it and the fun or a spitball is not diminished.

Whistling and spitballs ... sic transit gloria mundi.
Posted by genkaku at 7:54 AM